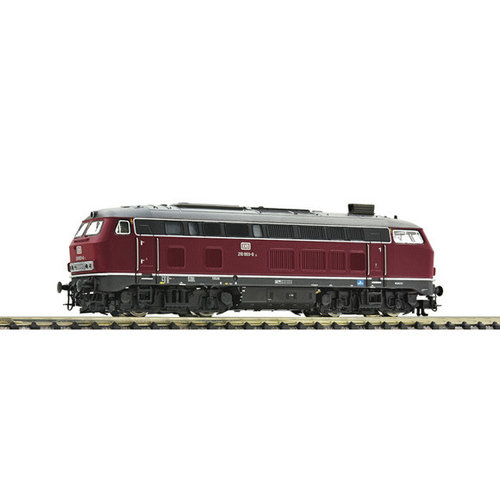 ■ Model with fine, separately attached plug-in parts
■ The headlights can be switched off completely or partially with a DIP switch
■ Prepared for cab lighting, which can be switched in digital mode
■ Matching train locomotive for the four-part “Popwagen” set 881908

Drive on all four axles with two traction tires. Next18 interface for recording a digital decoder. Coupler pocket according to NEM 355 standard with link mechanism. White / red LED headlights, changing with the direction of travel.

Prototype: DB ordered powerful AVCO Lycoming T53-L13 turbines from the then Klöckner-Humboldt-Deutz plants for the serial conversion of some of the popular V-160 family. From 1970 these units were used in the locomotives redesigned for the 210 series. The locomotives of company numbers 210 001–008 were quickly deployed on their intended regular routes.
The daily circulation included the "TEE Bavaria" express train and other heavy express trains between the Bavarian capital Munich and Lindau.