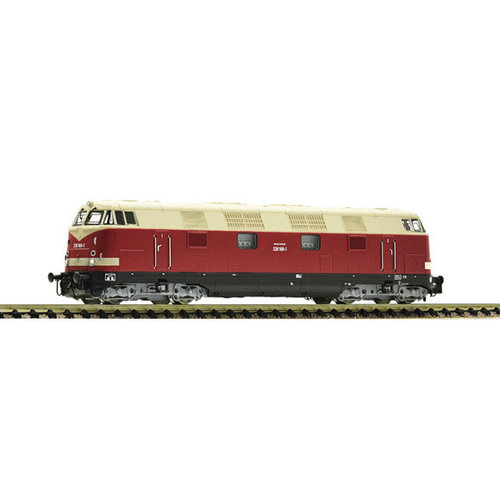 5-pole motor with a flywheel. Drive on 4 axles, 2 of them with traction tires. Next18 interface. Coupler pocket according to NEM 355 standard with link mechanism. White / red LED triple headlights that change with the direction of travel.

Prototype: The GDR's V 180 series was the largest diesel locomotive built in the GDR. It was initially built in a four-axle version with two 2-axle bogies, later there were also 6-axle versions. The low axle mass of 15.6 t is still considered an engineering feat in the six-axle version, so that this locomotive can also be used universally on branch lines. It also has approval for steep sections. The possible field of application that this creates is unique to large German diesel locomotives.
The V 180 accelerated the change of traction at the Deutsche Reichsbahn to replace various steam locomotive series in the performance classes above the V 100. Three copies, 118 548, 550 and 552, were assigned to the GDR government. In 1995 the last locomotives left the operational service at DB AG. After that, numerous copies were sold to private railways.