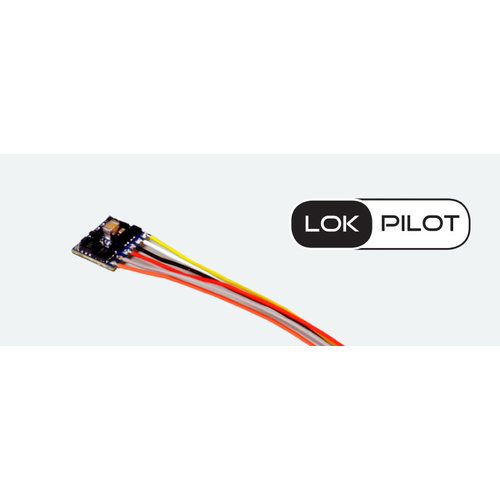 The LokPilot 5 Fx micro and its “twin” LokPilot 5 Fx micro DCC is an extremely small function decoder with a footprint of only 8.0mm x 7.0mm and a thickness of only 2.4mm (on the capacitor: 2.9mm). It is used in all vehicles of nominal sizes N to H0 that do not have an engine output, but should still be able to switch light effects.

modes
The LokPilot 5 Fx micro is a real multi-protocol decoder. It masters the DCC data format as well as Motorola® and Selectrix®. In DCC format, 14 to 128 speed steps are as natural as 2 and 4-digit addresses and up to 32 functions. Thanks to RailComPlus®, the decoders log on to a suitable digital center fully automatically. It masters all DCC programming modes and thanks to RailCom®, the CV values ​​on the main track can be read out with the appropriate control units. Auxiliary registers exist for control centers that can only program CVs from 1-255. Motorola® users benefit from up to 28 speed steps with 255 addresses. Three additional Motorola® addresses enable the activation of 16 functions. A built-in programming mode also makes reprogramming possible with the venerable Control Unit 6021.

The LokPilot 5 Fx DCC “only” speaks the DCC protocol, but can also be automatically registered with the relevant control center using RailComPlus®.

The LokPilot 5 Fx micro decoder recognizes the Märklin® braking distances as well as ZIMO® HLU / ZACK commands or the Lenz® ABC system. Braking with DCC brake modules or with DC voltage is also possible. It also stops with a Selectrix® brake diode. An ABC automatic shuttle train enables automatic commuting between two stations. This is also important for a function decoder in order to be able to synchronize control cars and motor vehicles.

The LokPilot 5 Fx decoder can be used on analog DC railways.

The decoder switches between the operating modes fully automatically "on-the-fly". Usually nothing needs to be set.

protection
Of course, the outputs are protected against overload. We want you to enjoy your decoder for as long as possible.