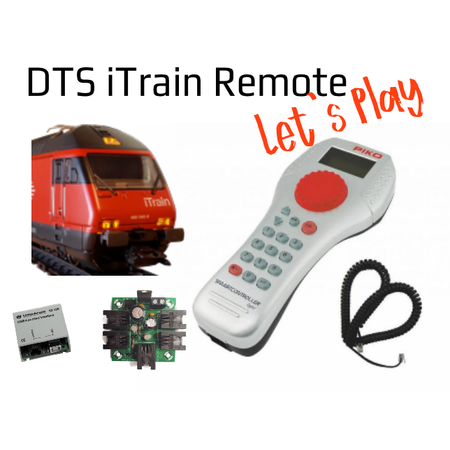 DTS has developed the iTrain Remote in collaboration with Berros. A virtual interface that allows manual control within iTrain with a hand controller.

With the virtual interface you can operate locomotives and accessories directly in the software instead of via a central unit. This allows you to control all components regardless of the interface to which they are connected. This solution also allows users of the hybrid Dinamo control system to shunt with analogue locomotives!

By using LocoNet hand controllers you can also see real-time speeds of the loco on the hand control and you are able to intervene and influence the speeds during automatic driving, without having to stop the automatic routing.
During shunting movements, iTrain sets the selected locomotive to manual control, if you allow the locomotive to run, iTrain reserves the points you set and the block after the points. All train traffic will be automatically stopped and resumed once you have arrived in the next block.

In short, DTS iTrain Remote and iTrain 5 offer you a playful model railway!

Note: DTS iTrain Remote works from iTrain 5, this will become available at the end of 2019. Through our newsletter we announce the release of iTrain 5 as soon as it is released by Berros.

You can order your license or upgrade from / to iTrain 5 in our webshop after the release!!

The DTS iTrain Remote manual will be available after the release on www.domburgtrainsupport.com


0 stars based on 0 reviews
add your review